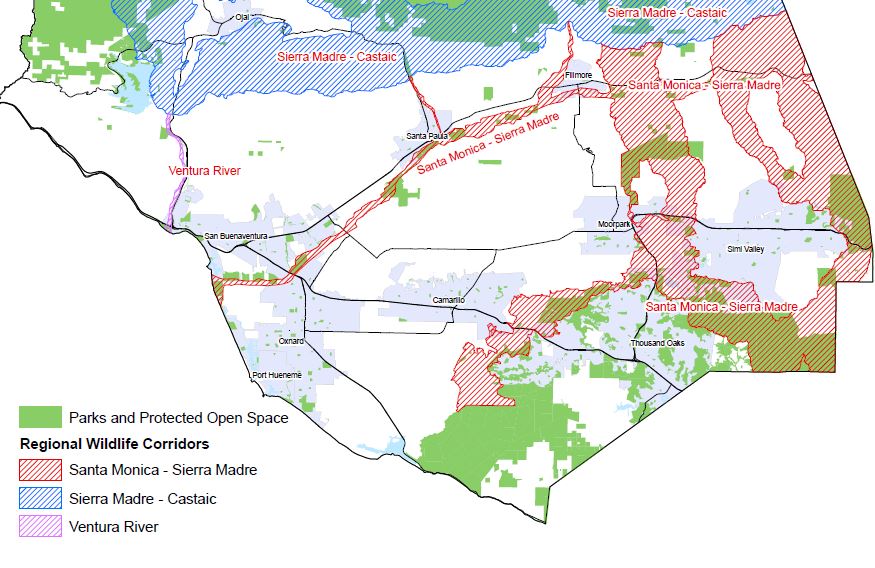 The County Board of Supervisors is considering the adoption of a Habitat Connectivity Overlay Zone, which would impose new regulations on agricultural and open space landowners immediately after the renewal of the SOAR ordinance until the year 2050. While SOAR promised to “save open space and agricultural resources,” additional new regulations could be another blow to the viability of thousands of acres of local Ventura County farmland that will be designated as wildlife corridors.

The proposed “overlay zone” encompasses 115,000 acres zoned Open Space and 49,000 acres zoned Agricultural Exclusive in Ventura County per a map prepared in 2006 by the non-profit group South Coast Wildlands. There was no agricultural representation in the speakers, working-group or steering committee. And there was no public process for technical review. The study, referenced as the South Coast Missing Linkages Report (Santa Monica to Sierra Madre Connection) includes maps that classify lands as wildlife movement corridors.

The mapped corridors cut through the heart of Ventura County, connecting the Los Padres National Forest with the Santa Monica Mountains. They encompass the entire length of the Santa Clara River and strike across prime agricultural land in the Santa Clara River Valley. They also cover significant rural areas near the major cities, enclosing the agricultural land around Tierra Rejada Road and on both sides of State Hwy 23 between Moorpark and Simi Valley. They envelop several residential developments between Thousand Oaks and Simi Valley along Wood Ranch Parkway and cut through the city limits of Thousand Oaks, Simi Valley, and Moorpark.

The unincorporated open space and agricultural lands within the corridors are subject to the SOAR restrictions in addition to a myriad of regulations by federal, state and local governmental agencies that already prevent most development. In many areas, the corridors are mapped over six miles wide, crossing fertile farmland in Fillmore, Piru, Camarillo, Ojai and Moorpark, much of which is in communities that depend on agricultural jobs.

On January 24, in a 3-2 vote, the Board of Supervisors advised the Planning Division to study potential new regulations within the mapped corridors. In March, seeking common ground with environmental advocates, CoLAB reached out to the local branch of The Nature Conservancy (TNC) to develop ideas for sensible regulations. Our goal was to facilitate existing wildlife movement while ensuring the ability of property owners to continue the productive use of their land.

After meeting with TNC and other environmental partners, TNC and CoLAB produced a joint memo including a number of suggested regulatory standards. This memo was sent to County Planning Director, Kim Prillhart. The memo included a standard barbed wire fencing design from the Natural Resources Conservation Service that would protect cattle ranching operations while allowing sufficient access for wildlife. Ideas for lighting designs that would reduce spillover were also included, recommending the use of downward directed lighting and suggesting reducing outdoor lighting after 10pm for large facilities like golf courses.

The memo also included ideas to encourage conservation easements to promote wildlife passage in areas where the wildlife corridors narrow. Encouragement of cluster developments is common across the U.S. to promote wildlife movement. Our memo suggested that land owners with contiguous parcels be allowed to transfer development rights, allowing the clustering of buildings on one parcel and placing the rest in a permanent conservation easement, requiring a cumulative maximum 5% lot coverage for the total parcel acreage. This would give property owners the ability to more effectively utilize their land while incentivizing a permanent solution for wildlife movement.

On June 8, the Planning Division held the first of several stakeholder meetings to gather input on potential new land use regulations within the corridors. CoLAB was well represented by members and staff, giving valuable perspective on landowner issues.

County Planning Division Staff offered several examples of wildlife corridor regulations from different parts of the country to present ideas for possible future regulations. Some of the examples included a restriction on area lighting after dusk, requirements to use low intensity light fixtures, noise restrictions, the use of fencing with a maximum height of 48 inches, prohibitions on perimeter fencing, restrictions on native brush removal, and development setbacks from critical habitat areas and chokepoints, which include bridges, culverts and underground road crossings.

Some of the proposed County regulations would impact most basic property rights for families who live and work within the corridors. Regulations being considered could impede the ability to build structures, limit future agricultural cultivation, and hinder the ability for local residents to protect their families, animals and crops with adequate fencing and lighting.

During the discussion on the County presentation, stakeholders raised a number of questions about how the wildlife corridors and the example regulations would impact agriculture and ranching in Ventura County. Agricultural Commissioner Henry Gonzalez asked how lighting regulations would affect crops and nighttime farm operations, particularly mobile lighting rigs which provide area light for farm workers. He also questioned whether restrictions on native brush removal would limit the cultivation of new orchards in the county.

Both Gonzalez and Farm Bureau CEO John Krist asked how the restriction on wildlife impermeable fencing would be compatible with federal food safety mandates and the need for property owners to prevent theft of crops. Members of the Cattleman’s Association also emphasized the importance of fencing to protect cattle from predators, as well as state requirements that cattle properties be fenced in.

The County has scheduled a second stakeholder meeting on Tuesday, August 8, 2017 from 1:00 p.m. to 4:00 p.m. at the Ventura County Government Center. We urge CoLAB members to attend and speak about the effect of burdensome regulation on their properties and livelihoods.

VC CoLAB will be conducting landowner outreach meetings in key areas of the proposed corridor to notify and educate local land owners on how potential regulations could impact their lands, homes and business operations. We have prepared a set of maps that show the location of the corridor areas for the benefit of our members. We are also continuing to meet with environmental partners to develop common-sense alternatives to punitive regulations.

The wild areas left within the identified corridors are already wild due to the stewardship practices of local family farmers and ranchers over many generations. It is unnecessary to punish these good deeds with property restrictions beyond what is already required in SOAR, guidelines for orderly development, greenbelt agreements and zoning ordinances.