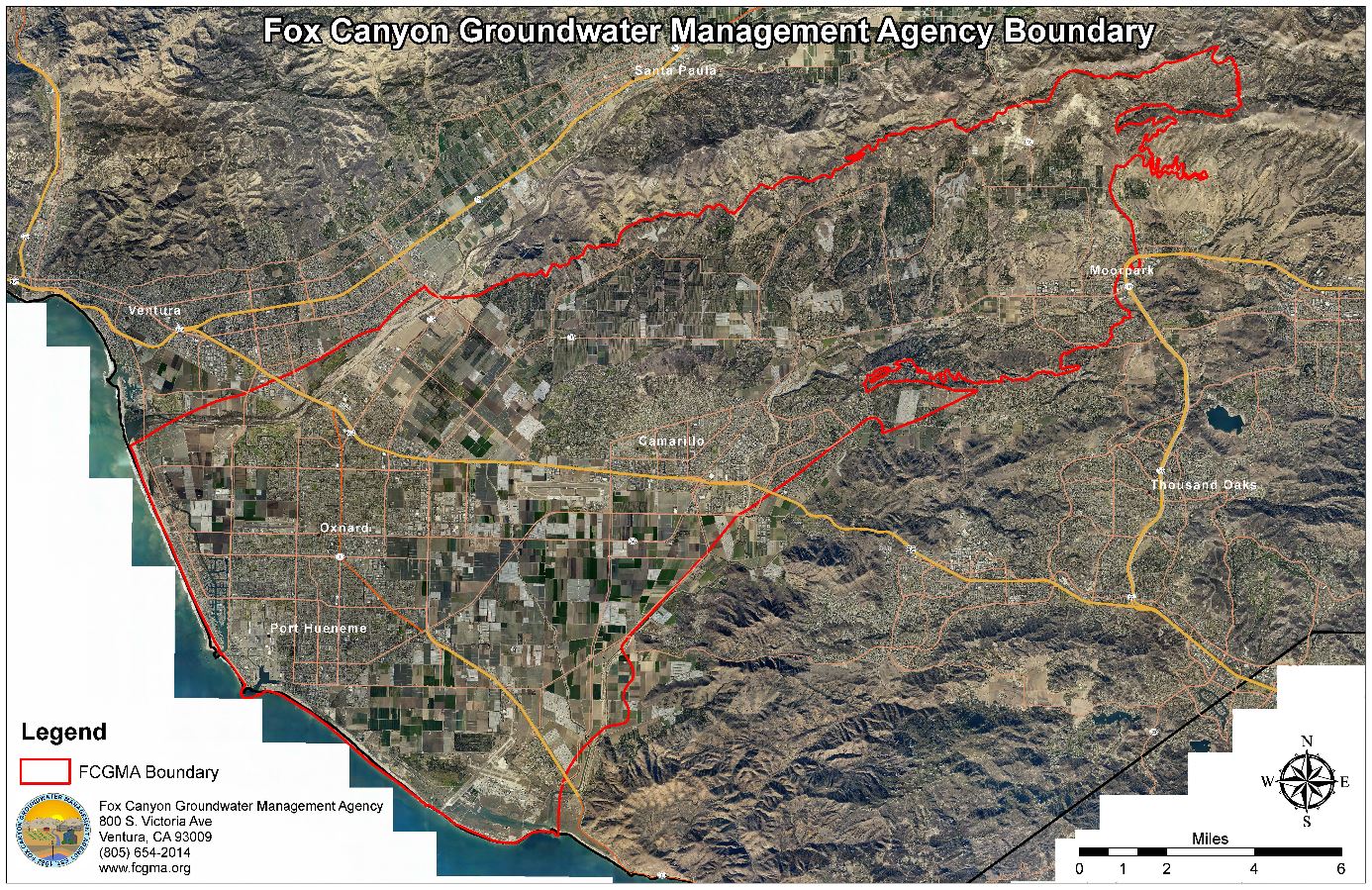 New pumping allocations are being considered for groundwater basins underlying Oxnard, Camarillo, Moorpark and surrounding agricultural areas that could restrict water for farms and forever change the local landscape. Pumping Allocation Systems adopted by the Fox Canyon Groundwater Management Agency will be a determining factor in whether our agricultural industry will continue to thrive in Ventura County.

Approximately half of the nearly 100,000 acres of agriculture in the County resides within the Fox Canyon boundary including the Oxnard, Pleasant Valley and Las Posas growing grounds. The lands that many of us casually pass through in our daily freeway commutes possess some of the richest soils and best climate in the world for agriculture.

These significant farming areas provide enormous value to the local community. They make a substantial contribution to the over $2 billion in agricultural revenue to the economy and provide fresh local produce, vast green vistas and an economically sustainable buffer to development.

Water for farms within the Fox Canyon boundary come primarily from wells that pump groundwater from thick sections of permeable sediments lying below the surface. While intermittent periods of rain help replenish these aquifers, storm flows from the Santa Clara River diverted into Saticoy spreading grounds are critical in providing water to these unique agricultural lands.

The last five years of drought have been punishing to the Fox Canyon aquifers. And, adding to the local crisis, decisions by the National Marine Fisheries Service have restricted water flow into the Freeman Diversion, the main replenishment system for the aquifers. The purpose of restrictions are to encourage recovery of the federally endangered Southern California Steelhead in the Santa Clara River.

However, similar restrictions on water deliveries from the State Water Project to Central Valley farmers were supposed to enhance recovery of the Delta Smelt in the Sacramento Delta. The result has been the abandonment of over 500,000 acres of California farmland with no appreciable benefit to the fish species in the Delta.

The allocation of water across regions and beneficial uses has become one of the most important challenges that California lawmakers face. Balancing basic water needs of the growing population while insuring national food security, meeting the public desire for local fresh produce and environmental stewardship will continue to be a difficult task.

In the Fox Canyon basins, these plans will quantify a sustainable yield which is an estimate of the total pumping volume that can be withdrawn from each groundwater basin without causing what SGMA refers to as “undesirable results.” Examples of undesirable results include degraded water quality, subsidence and seawater intrusion.

Pumping Allocation Systems would discuss how to divide up the pumping in each basin between classes of pumpers (.e.g., agricultural, municipal, industrial, etc.) and then to individual pumpers within each category. Of course, all of this is inherently controversial and a potential threat to livelihoods, water rights and property values.

To write the Groundwater Sustainability Plans, the Fox Canyon GMA hired a consulting team, organized a Technical Advisory Group (TAG), and appointed seven local volunteer technical advisors to the TAG to review the consultant data and conclusions. The consulting team is working on calculating a water budget and sustainable yield for each basin with direction from GMA staff and advice from the TAG.

The Las Posas Users Group (LPUG) is described as a grassroots stakeholder group consisting of pumpers and landowners in the Las Posas basins. They began meeting in 2009 and established an internal charter in 2015 that provided for the organization of a voting panel. While the preferred method of decision-making is consensus, a vote would be called by request of a participant or in the event of non-consensus.

LPUG organized the Pumping Allocation Sub-committee in 2014, and signed an official charter with the Fox Canyon GMA in 2016. The “Background” section of the charter describes its purpose: “to define the responsibilities associated with establishing a recommended groundwater pumping allocation system for inclusion in the Groundwater Sustainability Plan.”

LPUG’s meetings are open to the public and they claim that 2/3 of the basin pumping is represented on average at their general meetings. Meeting schedules and attendance sheets can be found on LPUG’s website at https://www.lpug.org/meetings-1/ . On several occasions, LPUG has mailed notice of its meetings and allocation plan process to assessor parcels identified to be within the Las Posas Basins.

Bryan Bondy is the Chair of the Sub-committee, which also includes Carol Schoen (vice chair), Neal Maguire, John Grether, Michaela Brown and Jane Donlon Waters. Mr. Bondy is a Professional Geologist, Certified Hydrogeologist and is the Contract Groundwater Manager for Calleguas Municipal Water District. Calleguas has been hosting the LPUG meetings in their boardroom and has funded staff to assist in development of the allocation system.

The LPUG Allocation sub-committee has been wrestling with the enormous task of creating an allocation system with a goal to maximize certainty, provide flexibility, respect groundwater rights principles, minimize undue hardships, be implementable and in accordance with, SGMA.

LPUG authored a draft “White Paper” in November of 2016 describing its proposed Pumping Allocation System. The white paper has been presented at LPUG’s general meetings, Fox Canyon board and committee meetings and has been discussed with Fox Canyon staff throughout the process.

Based on additional stakeholder comments, several revisions were incorporated into the final Pumping Allocation System White Paper dated 6-16-17. Four of the significant changes are described below:

The Oxnard / Pleasant Valley group (OPV) is younger, forming in 2016, representing overlying pumpers and landowners in the Oxnard and Pleasant Valley groundwater basins. Their meetings are, at least for now, by invitation only while they work through initial significant issues. OPV hired Steven Bachman, PhD, Professional Geologist, for technical hydrogeology advice in the process of constructing their Pumping Allocation System.

While OPV is behind LPUG in formulating their allocation system, they are making significant progress toward their goal of presenting an allocation plan to the Fox Canyon Board. They have been communicating with LPUG, having several joint meetings to discuss plan concepts.

LPUG’s final white paper was presented at a special Fox Canyon GMA Board meeting on June 23rd, a significant achievement for LPUG to meet this deadline. The purpose of the meeting was to allow stakeholders to comment on the final product while hearing comments and recommendations from the Fox Canyon Directors to LPUG and GMA staff.

The white paper was introduced by LPUG Chair Jane Donlon Waters and the specifics of the plan were presented by Brian Bondy as a method to attain long term basin sustainability. The pumping allocation system is very comprehensive. It starts with a list of objectives, defines management areas based on geology, and includes approaches to achieve sustainable yield, allocation pools, unexercised rights set aside, initial allocations, allocation reductions to achieve sustainable pumping, allocation carryover, rules for unexercised rights set aside, water exchanges, groundwater exports, stored water, annual reporting, water markets, and a variance process. It also recommends an LPUG advisory committee be created to serve the Fox Canyon Board “in a manner similar to a planning commission.”

Numerous stakeholders testified at this special meeting. A stakeholder group called the Las Posas Basin Water Rights Coalition (WRC) voiced concern about the Fox Canyon GMA’s Groundwater Sustainability process, including the development of the LPUG allocation plan and its potential effect on water rights. Preserving landowner water rights has always been the “elephant in the room” when considering allocations of pumping between a basin’s water users.

The WRC is being represented by Ventura attorney, Peter Goldenring, who provided testimony on behalf of the group. Mr. Goldenring claimed the group that he represents is about 4500 acres out of a total of 21,000 Los Posas irrigated acres estimated by LPUG. He added that his clients “are not newcomers to the process.”

In Mr. Goldenring’s testimony, many concerns were expressed about the process by WRC including the makeup of the LPUG voting panel, need for focused basin plans, lack of available hydrogeological data to support the Las Posas basins being in overdraft, lack of urgency or emergency around Las Posas, claim that the LPUG plan “strips” water rights, and that the allocation plan is being segregated from the larger Groundwater Sustainability Plan.

In conclusion, Mr. Goldenring stated that “a plan that strips water rights is legally attackable…legally attackable, arbitrary and capricious forces us to a lawsuit. My group doesn’t want to do that.” Finally, he pledged that his group would work with Fox Canyon GMA staff as they move forward with the process.

Susan Mulligan, General Manager of Calleguas Municipal Water District, testified that “Calleguas has a large Aquifer Storage and Recovery Project in the Las Posas Basin… an important supply if we ever get cut off from imported water.” She expressed Calleguas’ desire to work with the pumpers to preserve the right to operate the project. She also reiterated the shared goal of Calleguas and LPUG to not get into litigation and to facilitate a cooperative process.

Testimony by Las Posas grower Dan Rosenthal expressed concern that many landowners are unaware of the process. “…I’ve come to the realization that the parties that are not at the table are the landowners.” He expressed “the very deep impact the process will have on livelihoods…, and the financial impact on the entire valley. Ventura County itself has a very narrow economic base and agriculture is a huge part of it… The water rights have to be respected to the landowners themselves, otherwise this process is going to be stalled and eventually end up in the courts.”

John Grether, grower and landowner in the West Las Posas Basin and member of the LPUG Allocation Sub-committee, pointed out the amount of work and countless hours by the Sub-Committee members. With respect to water rights, Mr. Grether stated, “I think that the issue of water rights is very complicated… very significant legal questions throughout the State of California… There was never an attempt made by anyone on the LPUG panel to strip water rights… We’ve attempted to come up with a fair allocation system, should replenishment projects not deliver the water necessary.” He also expressed the importance of protecting the sustainability of the aquifers for the long term.

Fox Canyon GMA Board Chairman, Eugene West, commented after the presentations that staff and stakeholders should keep working on the allocation plan in a cooperative process, particularly with respect to unresolved issues.

CoLAB has the following comments with respect to the above stakeholder remarks at the Special Fox Canyon Board meeting:

The final LPUG White Paper presented at the FCGMA special meeting does not discuss or include language concerning overdraft in the Las Posas Basins. While sustainable yield estimates were developed for preliminary planning purposes by Bryan Bondy, these estimates and the minimum allocations for agricultural well owners were removed from the final White Paper.

After reflecting on recent Fox Canyon activities, including the June 23rd Fox Canyon Special Board Meeting, considering the GMA Board Comments, having conversations with many involved CoLAB partners, members and Board members, and understanding the fluidity of the process, the following are our recommendations for any pumping allocation ordinance adopted by the Fox Canyon GMA:

It is important to note that the State Legislature has recognized that it will take time for groundwater basins in California to achieve sustainability, building a 20-year period into SGMA to achieve the results. This gives time for Groundwater Sustainability Agencies to adopt replenishment fee programs to fund projects to add supplemental water to basins that are not currently achieving sustainability.

The Fox Canyon GMA is well ahead of most agencies in California in the preparation of Groundwater Sustainability Plans through a partnership with agricultural stakeholders. CoLAB is committed to participating in the process to advocate for sustainability plans based on the most advanced scientific data that can be compiled within a reasonable time frame while supporting agriculture’s viability in Ventura County.