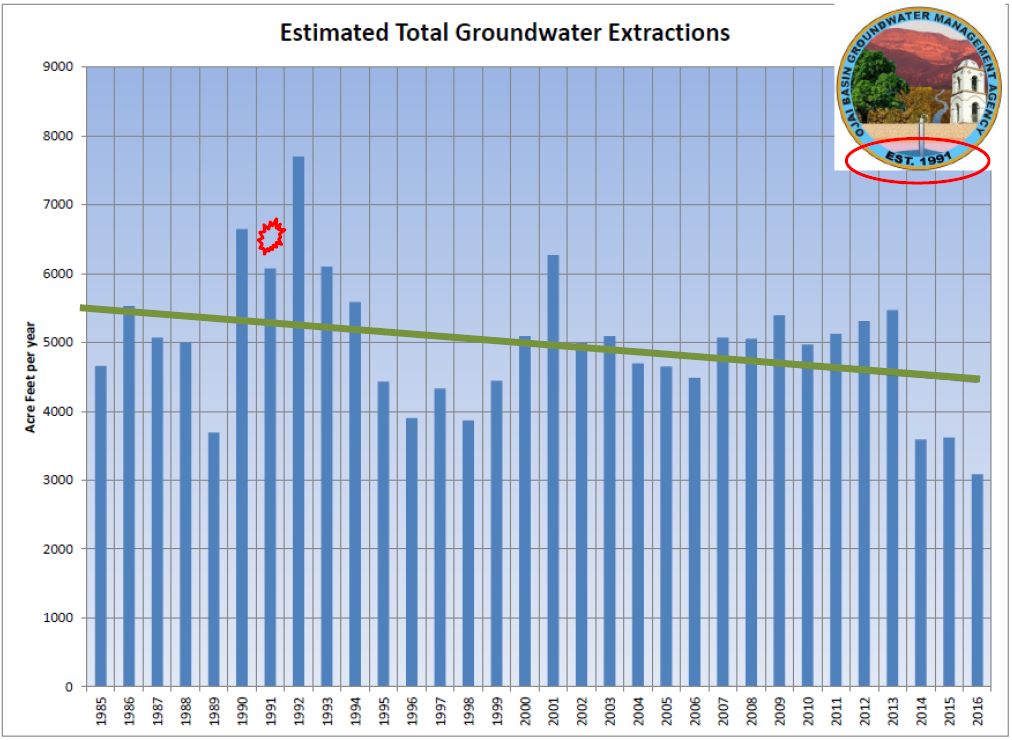 Seeking to extend County authority over water, Supervisor Steve Bennett is targeting the Ojai Basin Groundwater Management Agency (OBGMA), with authority that could be extended to other groundwater basins in the future. In December, Mr. Bennett urged the Board of Supervisors to pass an extension to the current water well moratorium if Groundwater Sustainability Agencies (GSAs) file an Alternative Plan (compared with a Groundwater Sustainability Plan, or GSP, under the Sustainable Groundwater Management Act, or SGMA). This currently targets the OBGMA as it is the only GSA in Ventura County to file an Alternative Plan with the CA Department of Water Resources (DWR).

The Board of Supervisors passed the urgency ordinance on December 6th, extending the well moratorium in the Ojai Basin for approximately 5 months. Then, on December 13th, Mr. Bennett brought up the issue again, adding a late item on the addendum agenda, urging a second revision to the moratorium ordinance. This passed on a first reading that will need to be voted on again by the Board of Supervisors on January 10th.

VC CoLAB does not support the passage of this revision to the urgency ordinance. We believe the new language violates the supposed intent of the moratorium which was to encourage newly-formed GSAs to prepare a plan, supported by their boards, and file them with DWR in a timely manner. This revision extends County authority over well drilling, challenging the legislative authority of the OBGMA to manage its basin, essentially establishing veto power over groundwater management activities in the future. While this ordinance currently targets the Ojai Basin, future revisions could be made as urgency revisions, without proper public input as was done in this case.

The new revision will be precedent setting, expanding County authority by requiring approval by the County Watershed Protection District for all water well permits in the Ojai Basin until DWR approves the OBGMA’s Alternative Plan. The concerns regarding the determination that must be made by Watershed Protection District are: 1) the uncertainty of the standard of “significant adverse impacts” for well permits; 2) the application of the District’s authority to both surface and subterranean water supply; and 3) the expanded application to even repairs and modification of existing water wells, items which were specifically excluded in the Moratorium Ordinance. This permit process would essentially require a California Environmental Quality Act (CEQA) type analysis for all wells until the OBGMA Alternative Plan is adopted by DWR.

Mr. Bennett expressed his public opposition to the OBGMA filing an Alternative Plan in his December 6th letter to the Board of Supervisors. One of his objections was the supposed “tremendously truncated review and approval process of the OBGMA’s alternative plan”. But the OBGMA presented the key elements of their plan starting in October of 2016, receiving verbal comments at four public forums and two open board meetings prior to meeting DWR’s required filing date of January 1, 2017. Once submitted, the alternative plan process requires a 60-day public comment period with DWR.

In contrast, Mr. Bennett’s urgent actions to change the Moratorium Ordinance at the Board of Supervisors did not include any public forum or notice to the OBGMA Board or the Ojai Community.

The purpose of this Alternative Plan was to document the past sustainable management efforts of the OBGMA and their ability to balance extractions with replenishment given the characteristics of the Ojai Basin that recharges quickly during rainy periods. The Ojai Basin fits the criteria for an Alternative Plan per DWR direction (from J. Kear Presentation, 10-27-16):

Per the OBGMA Alternative Plan filed with DWR on 12-23-16: “Approval of this demonstration to meet the DWR requirements for an alternative plan will allow OBGMA to focus its limited resources on existing and planned future Basin management actions, while avoiding the expensive, time consuming, and unnecessary process of having to prepare a Groundwater Sustainability Plan.”

According to the Alternate Plan: “Over the long term basin management period (1991-present), despite extended multi-year droughts, there has been no evidence of “undesirable results” anywhere in the Basin that might suggest that extractions are exceeding the Basin’s sustainable yield.”

One of Mr. Bennett’s criticisms of the alternate plan in his December 6th letter was that the OBGMA is preferentially representing water extractors rather than the overall interest of the citizens of the Ojai Valley. But, the OBGMA alternate plan fulfills the mission of the OBGMA from their enabling legislation which is to: “Preserve the quantity and quality of groundwater in the Ojai Basin in order to protect and maintain the long-term water supply for the common benefit of the water users in the basin.”

Another concern expressed by Mr. Bennett alludes to the frustration by water users in his District over the “severe water rationing” and the low level of Lake Casitas.

It is not surprising that there is consternation from residents throughout Mr. Bennett’s District as they continue to feel the pain of excessive water conservation and reduced water quality with no presented alternatives. This reflects the lack of leadership to implement realistic supply-side solutions to benefit the District’s water users during this five-year drought.

To blame the management of the small Ojai Basin for this regional problem is unfounded. In simple terms, the Ojai groundwater basin is like a bucket full of sand and rocks. The basin fills very quickly from the surrounding mountain runoff in rainy periods. In times of drought, historically pumpers have pumped less water, relying on Lake Casitas when possible. In 2014 and 2015, private well pumping was reduced by 30% compared to the last rainy year of 2011.

We fail to see how a well moratorium will benefit Lake Casitas. Denying new well permits will add MORE pressure for residents, farmers and businesses to buy water from Casitas MWD, their only alternative. Lake Casitas is certainly low after five years of drought. That is why the imported water solution, including a pipeline connection through Calleguas MWD is critical and the quickest solution to replacing the water usage of Lake Casitas.

As reported in an article in the Ventura County Star, “Ojai Groundwater Agency: We don’t need a New Plan”. (Claudia Boyd-Barrett, 12-21-16): “Citrus and avocado farmer Emily Ayala said the basin is self-regulating, and when there is less water, well pumpers simply pump less.” This has been validated by over 30 years of extraction data.

In conclusion, VC CoLAB does not support the passage of the proposed revision to the urgency ordinance to be heard at 10:00 AM time certain at the Board of Supervisors on January 10th. This revision extends County authority over well drilling, challenging the legislative authority of the OBGMA to manage its basin. While this ordinance currently targets the Ojai Basin, future revisions could be made as urgency revisions, with no notice to water users negatively impacting our members in Ventura County.