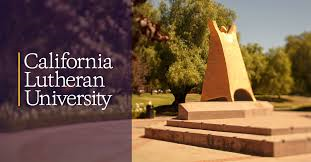 Cal Lutheran University’s Center for Economic Research and Forecasting (CERF) is projecting another year of slow economic growth for Ventura County, according to Executive Director and Ph.D. economist, Bill Watkins. Dr. Watkins forecasts a low 1.1% annual average jobs growth rate and predicts that the County’s GDP and jobs growth will be even less than projections for our slow-growth state in 2016.

In a December Ventura County Star article, Dr. Watkins stated that Ventura County’s economic growth will continue to be slow for the next two years in large part because “the county’s political class does not want to see job growth”. This was labeled “preposterous” by County Supervisor and SOAR Board member Steve Bennett calling this “anti-SOAR rhetoric”.

But this is not the first time economists have called out SOAR for lack of economic growth and in general economists are driven by data – not politics. The original SOAR ordinances were passed in the mid 1990’s to early 2000’s and most are set to expire in 2020. The set of nine ordinances, including one countywide and eight city initiatives, were originally written by the SOAR organization, the board of which is dominated by two county career politicians. Some of the cities modified the ordinances before submission to voters. City of Fillmore voters rejected two growth control initiatives in 2000, one backed by SOAR and the other by the City Council. In 2002, the Fillmore City Council adopted a growth control initiative keeping SOAR from placing a second initiative on the ballot. Now SOAR has re-written Fillmore’s own initiative and is pushing the Council to support it with a sunset date of 2050. The Council unanimously spoke out against the move. SOAR went ahead and filed the ballot initiative without their support.

In fact, SOAR has recently filed initiatives for the November 2016 ballot, changing language and extending all nine ordinances for 34 years to 2050. Many economists in the county are questioning this SOAR renewal plan. The SOAR philosophy is to require public votes for development beyond city urban restriction boundaries (CURBs) which are set by the SOAR Organization. While SOAR professes that such restrictions will “save agriculture”, the results implement a strict land preservation policy without language necessary to help local farmers stay economically sustainable in this time of unprecedented challenges.

CoLAB believes that there are three major flaws in the SOAR 2050 set of ordinances: 1) 34 years is too long for any land use ordinance that impacts job growth; 2) The SOAR politicians write their initiatives in secret with limited expertise and no public process for input; and 3) SOAR takes agriculture for granted, lacking strong goals and policies to ensure economic sustainability. Such goals and policies could have easily been added to the countywide SOAR initiative as are found in general plans of other agricultural counties in California. These three objections have coalesced from candid conversations with local decision makers including city council members and economists, business owners and our members.

Dr. Watkins calls out the “political class” in a December rebuttal to a Star editorial, describing them as “the people who participate in setting the political agenda through participation, funding, speech and the like. They tend to be older and wealthier than the average citizen, and they often have more at stake. Lower-income people tend to not participate as much, and since their voice is less well funded, it is a less-heard voice. The political class is not representative of the general population. It’s engaged in maximizing its own self-interests and its interests are not those of poor people”.

In his Star rebuttal, Dr. Watkins describes four basic principles: “Everybody deserves an opportunity to work and to improve their economic condition. We need to protect our environment. We should protect our environment in the most efficient way possible. People who benefit from a regulation should pay for the costs of that regulation.” He further states, “California too often pays attention to only the second principle.” Many state and local regulations are passed in the name of environmental advocacy. But the increased costs of essentials like energy, water and housing are borne disproportionately by the poor which is exacerbated by slow economic growth policies.

The presentation of CERF’s 2015 Ventura County Forecast was held on December 1st where Dr. Watkins described how “Death by DURT (Delay, Uncertainty, Regulation and Taxes)” hinders job creation. At Board of Supervisors meetings, CoLAB regularly testifies against regulatory red tape being added to energy, water, and infrastructure projects that hinders job prospects in the county.

Speaker Adam Firestone, Principal, Firestone Walker Brewing Company, told the company’s story and how unfettered government has eliminated entry level jobs such as bar-backs and dishwashers which are now automated. Jobs that used to be the first steps of opportunity for unskilled workers will rely more and more on robots, removing opportunities for that critically important first job. Firestone predicts that companies will continue to move offshore to better environments and/or pursue tax breaks and exceptions to be able to stay in business.

Speaker Bruce Stenslie, President / CEO of the Economic Development Collaborative – Ventura County, described the decline in manufacturing and construction jobs in the County, particularly since 2006. While he referred to the $3.3 billion agricultural industry as a legacy, he pointed to nagging concerns in the County including stress in the labor market, lack of water and an underproductive food processing sub-sector. Stenslie recommended expanding allowable zoning uses on agricultural lands to include processing of locally grown products on lower value farm land. Initial estimates of land necessary to create such a food processing economy range from 225 to 450 acres on sites ranging from 5 to 15 acres. This would lead to estimated jobs created of 2,680 to 5,450 jobs. However, without any planning or economic analysis, the authors of the SOAR 2050 initiative restricted such future food processing opportunities to acreages and sites that will create little to no economic or job growth. This exemplifies Watkin’s point that the political class does not want to see job growth.

Speaker Matthew Fienup, Economist with CERF, called SOAR a “blunt policy implement” which has contributed to “a hollowing out of the middle class, increased income inequality and decreasing economic mobility”. During the Q & A session, Fienup replied to a CoLAB question about how to improve SOAR by suggesting that simple pro-agriculture goals be added along with tradable development permits.

CoLAB’s goal has been to support the AG Working Group in its pursuit of an alternative countywide SOAR ballot initiative that sunsets in 20 years (2036) and provides real policy support for an economically sustainable agricultural industry. This includes the potential to create significant new jobs in processing locally grown products as recommended by Bruce Stenslie. In addition, it includes strong policy support for water infrastructure and farmworker housing that is critical to the survival of local agriculture. 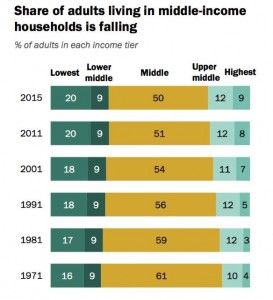 “PEW dubbed this as a tipping point in the long erosion of the middle class… High tiered workers are increasingly favored, and if you’re of low skill, lesser education, you’re very likely to be left behind, said Rakesh Kochar, an associate director for research at PEW”. The graphic shows the extreme ends of the income spectrum are growing while the middle class is shrinking. Since 1970, economic policy, regardless of party politics, has benefitted the wealthy class at the expense of low income wage earners. This is in part due to a political class, as Dr. Watkins describes, that promotes their own self-interest, such as policies that hinder economic growth and promote specialized benefit packages for politicians.

Economics are fundamental to our quality of life, providing the resources for our county and cities to remain safe and meet expectations for infrastructure and basic services. It is essential that those voting on the SOAR 2050 ballot initiatives read the fine print and be aware of the potential economic consequences of 35 years of such policies and the lack of support for agriculture.

A conference presenting new economic data with respect to SOAR’s impact on the Ventura County economy will be presented by Mark Schniepp, Director of California Economic Forecast on Friday, February 5, 2016, at the Hyatt Westlake Village. Panelists will include CLU-CERF Economist, Matthew Fienup; CoLAB Executive Director, Lynn Jensen; and President/CEO EDC-VC, Bruce Stenslie. Registration for the Conference begins at 7:30 am with the program starting at 8:20 am and adjourning at 10:45 am. Please check our VC CoLAB January 2016 Newsletter email for more details on how to sign up for the conference including a special offer for members.