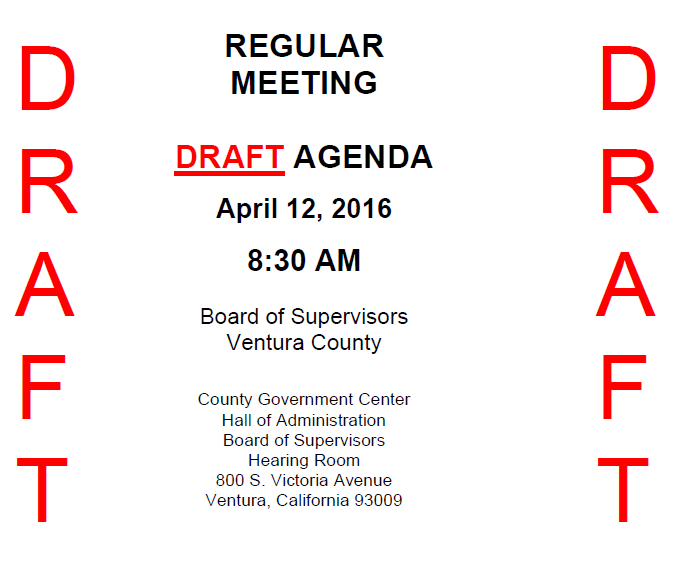 Importantly, the CEO’s office is responsible for the Board of Supervisors’ meeting agenda where policy changes that affect businesses are frequently considered. The timing of releasing the Board agenda is critical to whether the public has adequate time to consider important issues and prepare thoughtful and researched responses.

VC CoLAB believes that public input to regulators helps foster understanding and reduce frustration by those of us who must ultimately live with the regulations. Our members include over 450 businesses in the county, many who come before the Board of Supervisors for project approvals. Our mission is to monitor, research, and collaborate to propose sensible regulatory solutions on policies that affect our members.

At the Board of Supervisors board meeting on March 8th, the CEO’s Office recommended publishing a “Draft Agenda” on the Monday preceding each Board meeting, eight days in advance. While the California Government Code requires a full agenda 72 hours in advance, the County of Ventura currently publishes their agenda on the Thursday morning prior to the Tuesday morning meeting, about 118 hours before the meeting. While the current timing exceeds the code requirement, the CEO’s office recommended not only publishing the draft agenda 192 hours (eight days) before the board meetings but also having the draft agenda contain a “Future Items to be Scheduled” section.

As an organization that regularly provides testimony on behalf of businesses on the impacts of Board policies, we appreciate this step forward in public disclosure. CoLAB has been meeting with the CEO’s office quarterly and has discussed with Mike Powers the frustration of only a 2-3 working day notice for complex policy changes on the agenda. Sometimes the policies have been in the works for years and require in depth research to gain understanding of the impacts to business.

In addition, business owners and employees likely need to rearrange their schedules since the board meetings are scheduled on Tuesday mornings. Advance notice of items will be helpful in providing relevant testimony from those affected.

VC CoLAB is very much in favor of publishing an advance draft agenda on the Monday preceding the board hearing and the “Future Items to be Scheduled” section. We agree with the CEO that this will benefit the public by having as much advance notice as possible. And, we testified at the hearing that we believe the County will be recognized as a leader in the State with respect to public access. Kudos to CEO, Mike Powers, and to the Board of Supervisors for voting unanimously in favor of this important change of policy!