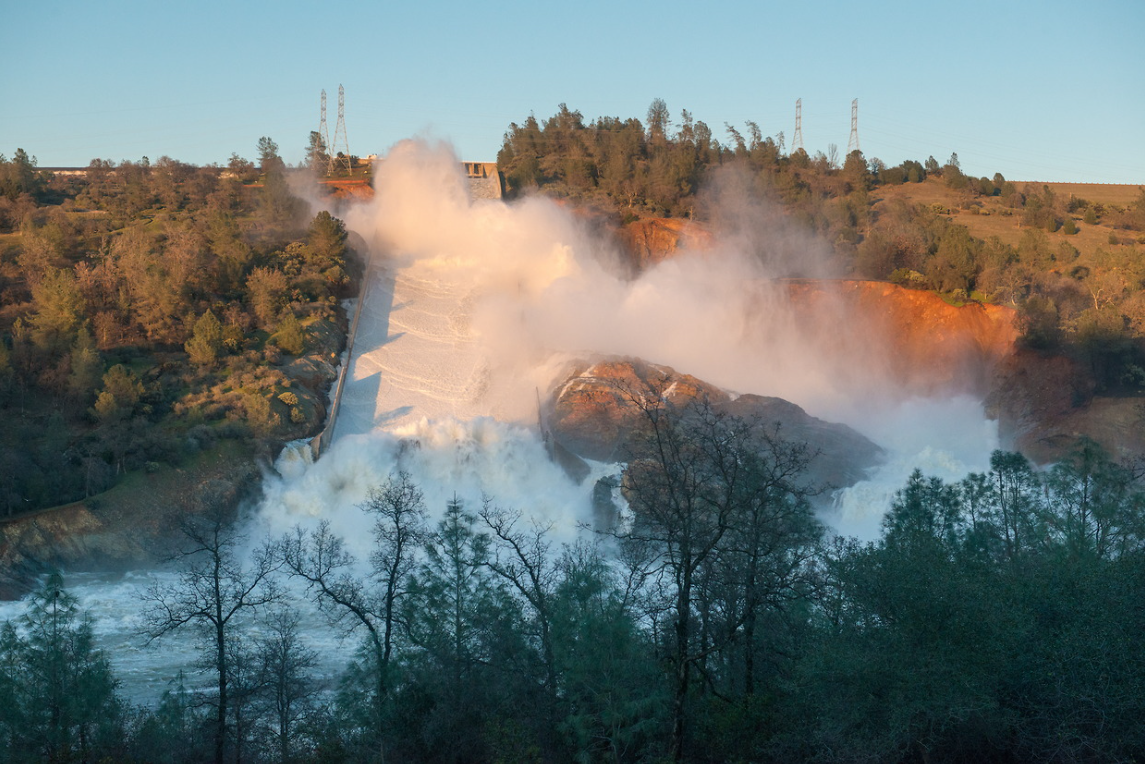 The recent heavy rains have relieved drought conditions across the State, but they have also highlighted how much work needs to be done to update California’s aging water infrastructure, according to Eric Bergh, Manager of Resources for Calleguas Municipal Water District.

Bergh gave a presentation on the State’s water situation to a packed room at CoLAB’s monthly WHEEL Committee meeting on February 15. Showing amazing footage and pictures from the intense rains and snows earlier this year, he highlighted the unprecedented amount of rainfall the state has been receiving. As of February 14, rainfall was far above average across the State, breaking records for precipitation. In Ventura County, the rains exceeded the average for past years, with many cities seeing 150% to 175% above average rainfall. Even with all the extra rain however, Ventura County is one of the few areas in the state that is still recovering from drought conditions.

In the Northern Sierras, precipitation was 221% above average and nearly all of the State’s reservoirs had reached or exceeded their historical average fill level. Lake Shasta, Lake Oroville and the Don Pedro Reservoir were all over 135% full.

For Lake Oroville, the heavy rains were causing damage as the lake reached 96% of its capacity.  Massive erosion occurred along the main spillway at the dam and the subsequent erosion of an emergency spillway caused the evacuation of hundreds of thousands of people from the nearby town of Oroville.

The situation at Oroville puts into stark relief the need for California to update its water infrastructure to meet the needs of a modern California, according to Bergh.  It has been decades since the last major water storage project was completed and in the meantime California has experienced significant population growth. CEQA and other environmental laws delay projects and the State government has not put the time or the resources into improving water infrastructure.

Even when there is money available for new water storage, bureaucratic delay prevents projects from taking off.  Proposition 1, which was approved by voters in 2014 in the midst of severe drought, allocated $2.7 billion for water infrastructure. Yet two years after the bond was approved, not a single project has yet to be funded and the state is not even finished setting up the process by which projects will be evaluated and approved.

Toward the end of his presentation, Bergh showed members pictures of stormwater flows through the Yolo Bypass, which diverts water to the sea when flows become dangerously large in the Sacramento Delta. In the month of January alone, 3.4 million acre-feet of water flowed to the sea, which is the equivalent of a 6 year supply of water for the city of Los Angeles. Without a greater focus on improving water infrastructure, California will continue to see such water wasted when it could be stored for future drought years.

There are solutions to long-term water storage that are critical for all population centers in our State, including the Bay Area, Central Valley and Southern California. The California WaterFix is a viable plan championed by Governor Brown to install water pipelines under the environmentally sensitive Sacramento Delta which would deliver water from Northern California Reservoirs to the south. The project is a comprehensive water strategy for California that improves reliability of our water supply and restores the habitat of the Sacramento Delta. The plan is supported by Calleguas Mutual Water District along with a broad-based coalition of water agencies and business groups.

VC CoLAB is a strong supporter of the CA WaterFix, partnering with Calleguas, and testifying at the Los Angeles Regional Water Quality Control Board in Sacramento last year. The project is key to maintaining Ventura County’s water reliability as 75% of our water is imported, mainly transported from the Sacramento Delta through the California Aqueduct. We believe that the CA WaterFix strikes a reasonable balance between water delivery and environmental concerns.

While water conservation is always a good policy, there is a certain baseline water requirement for our community to maintain its high quality of life. Neglecting our water infrastructure, as was shown by the near disaster of the Lake Oroville spillway damage, is not a competent strategy for a State Government that serves nearly 40 million people.