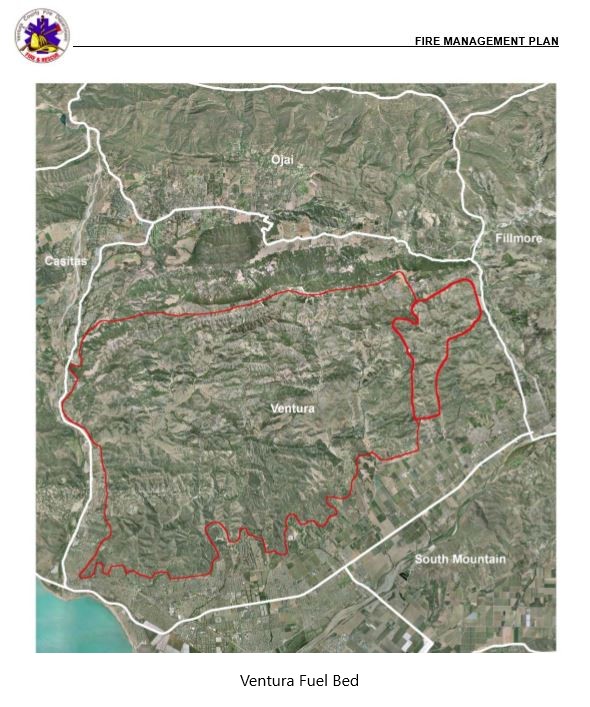 In 2009, the Ventura County Fire Protection District produced a Fire Management Plan that identified the “Ventura Fuel Bed” (see map) as part of its countywide wildland fire prevention program. This fuel bed turned out to be the core of the Thomas Fire, responsible for the majority of homes burned as the fire swept through brush filled unincorporated lands between Santa Paula, Ojai and Ventura, driven by the unpredictable Santa Anna winds. 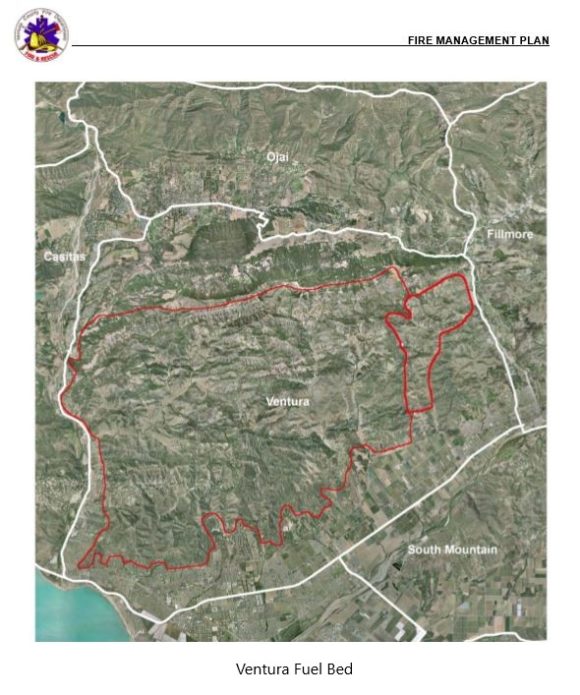 The Fire Management Plan described the Predominant Risk Exposure: “The greatest area of risk in the Ventura Fuel Bed is in the interface area that separates the City of Ventura from the County jurisdictional areas. Fingers of development have continued to grow over time. Development in the areas between Harmon, Sexton, and Barlow Canyons would be challenging to protect in a wild fire driven by winds from the northeast. Additional at risk areas include Sulphur Mountain Road, Creek Road and the east side of Highway 33. Orchards are also at risk throughout this fuel bed and need consideration when planning for fuel modifications.”

This Five-Year Vegetation Management Plan, commonly referred to as the Five-Year Burn Plan, had the overall strategic objective of modifying hazardous fuels within the County. Controlled burns are a significant tool in reducing fuel in order to impede wildland fires.

According to the Plan, the San Buenaventura Project was identified within the Ventura Fuel Bed: “It consists of the following canyons: Sexton, Harmon, Sloan, Aliso, Barlow, Canada Larga, School, Hall, Lake, Wheeler, O’Hare, and Manual. This project is 43,362 acres and has been selected due to its ability to protect its interface area from Ventura to Santa Paula. The method of treatment consists of cut, stack and pile burning, prescribed fire and mechanized work.” The San Buenaventura Project was designated as priority ranking 1=High by the VC Fire department.

In 2010, the Ojai Fire Safe Council prepared a Community Wildfire Protection Plan acknowledging the San Buenaventura Project and also ranking it as priority level 1. The Plan was signed by Linda Parks, then Chair of the Board of Supervisors; Bob Roper, Ventura County Fire Chief; and Matt Jenkins, Unit Chief of Cal Fire. The status of the San Buenaventura Project in the Plan was marked “pending environmental” according to Ventura County Fire Protection District.

This 2010 Plan mapped the areas of the fourteen communities in Ventura County identified as “high risk for wildland fire disturbance” in the Federal Register. Statistics show that 76% of homes within the County are within these “Communities at Risk” and less than 20% of the housing units in these communities were built after 1990.

The list of Communities at Risk include Fillmore, Ojai, Oak View, Meiners Oaks, Mira Monte, Ventura and Santa Paula, the main communities in Ventura County affected by the Thomas Fire. They also include Camarillo, Casa Conejo, Fillmore, Moorpark, Oak Park, Piru, Simi Valley and Thousand Oaks that could be targets of the next wildfire.

The stated objective of this Plan was to identify and prioritize areas for hazardous fuel reduction treatments to reduce wildfire threat and to recommend measures to reduce ignitibility of structures for the identified Communities at Risk. While there were areas within the 43,362 acres of the San Buenaventura Project that had cattle grazing activities to reduce fuel loads, according to Richard Atmore, Board member of the Central Ventura County Fire Safe Council, less than 2% of the burn plan was accomplished prior to the Thomas Fire.

To understand the importance of wildfire planning and implementation it is essential to consider historical fire data. In the Ventura Fuel Bed, there were 14 fires larger than 300 acres between 1950 and 2007, 10 of which were reported to be wind driven. All of these historical fire’s time of occurrence was between July and October. The Thomas Fire is an outlier in starting in December.

Bob Roper is the retired Ventura County Fire Chief and the retired State Forester for Nevada with 40 years of firefighting experience. His frustration is evident in a recent article in Evergreen Magazine: “Bob Roper on Wildfires and What to Do Next” (1-2-18) which is a must-read.

Mr. Roper rightly points out: “Elected leaders are using “climate change” as the #1 sound bite for the reason why today’s wildfires are so damaging. Whether a person believes in climate change or not, today’s fires are becoming more damaging because of unhealthy landscapes, reduction of commercial logging, population growth into wildland fire areas and increased frequency/scope of wildfire incidents.”

He also quoted Philosopher George Santayana who said, “Those who do not learn history are doomed to repeat it.”

In the article, according to Mr. Roper the following are included in his section entitled: These Things Must Happen:

Restore & Maintain Landscapes
• EPA standards need to weigh the negative effects of uncontrolled smoke during a wildfire versus conducting controlled burns to restore the landscape.
• The environmental review process to approve landscape treatment projects needs to be streamlined.
• Congress must develop a funding source for federal fire agencies that does not supplant prevention dollars to suppression dollars.
• State and local governments must recognize their responsibility and fund wildfire activities themselves and not be solely reliant on federal funding.
• We must develop legal immunity provisions for government agencies, non -governmental entities and private parties to encourage proactive landscape treatment actions for a backlog of projects.
• Government must empower people who live off the land to be its stewards. These groups (Native Americans, foresters, farmers and ranchers) are the best land managers around because they know that well-managed lands will yield the best resources and agricultural products. They do not need government telling them how to manage their land because they live the need for renewable land every day.

These points made by Mr. Roper are largely responsible for the lack of proactive land management for wildfires in our County. The “backlog of projects” evident across Ventura County has been a frustration for the private stewards of the land, many of whom have paid the price in losses of their homes and agricultural livelihoods.

CoLAB believes the fact that wildfire plans including controlled burns were not implemented prior to the Thomas Fire is a reflection of a misunderstanding by California leaders. Particularly, Ventura County politicians have led the community to believe that pristine wilderness adjacent to developed communities is necessary to maintain wildlife habitat.

In fact, the opposite has been shown to be true in the wake of the destruction of the Thomas Fire in the open spaces of Ventura County. According to Richard Atmore, wildfires are ten times more devastating to the environment and urban communities than controlled burns.

The editor’s note in the Evergreen Magazine article aptly points out: “Mr. Roper brings 40 years of firefighting experience to this discussion, so we’d suggest you read what he has to say because, in our opinion, he has artfully lanced a festering boil the political classes continue to ignore… Another wakeup call for federal, state and local elected officials who have refused to heed Mr. Roper’s recommendations.” 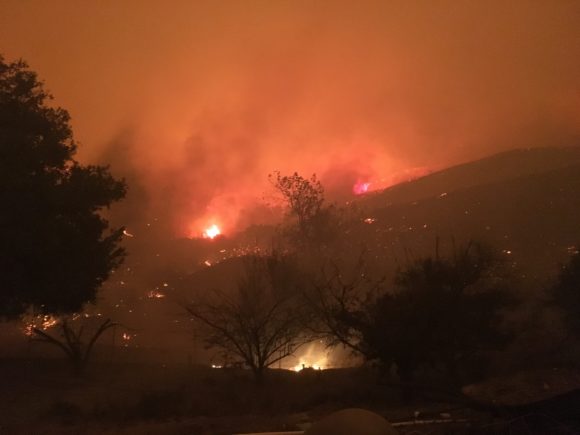