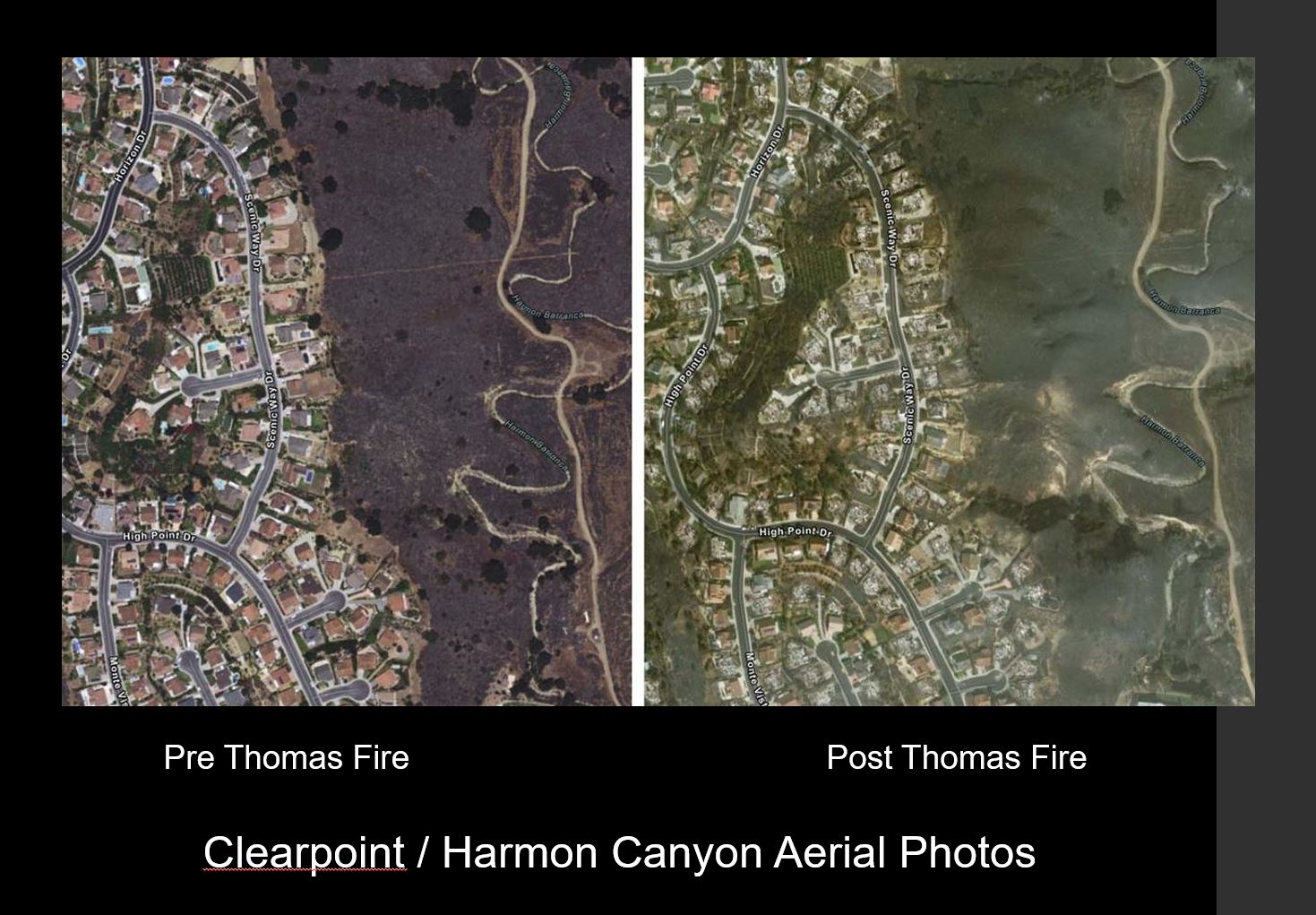 Nearly a decade ago, prior to the Thomas Fire, Ventura County fire agencies prepared Wildfire Protection Plans identifying risks, funding priorities, and programs to reduce the impact of wildfires countywide. Fire agencies were warning of increasing wildfire danger even before the current drought cycle began in 2012. The plans, prepared in 2009 and 2010, outlined remedies that were largely unheeded and unfunded, providing a wake-up call for communities that are still at risk, particularly in eastern Ventura County.

The wildfire plans identify high risk areas adjacent to all Ventura County communities except for Oxnard and Point Hueneme. Flat terrain and fields of irrigated agriculture surround these cities protecting them from wildfire risk. All other cities and most unincorporated communities were identified as being in close proximity to Cal Fire designated “very high fire hazard severity zones”.

The Ventura County Fire Protection District’s 2009 Fire Management Plan, signed by former Fire Chief Bob Roper, predicted the area where the Thomas Fire destroyed homes adjacent to the Ventura Fuel Bed, clearly describing the risk: “Fingers of development in the areas between Harmon, Sexton and Barlow Canyons would be challenging to protect in a wild fire driven by winds from the northeast. Additional risk areas include Sulfur Mountain Road, Creek Road and the east side of Highway 33. Unfortunately, only 2% of the prescribed fuel management activities in this fuel bed were implemented prior to the fire.

These “fingers of development” described in the plans, refer to the Ondulando, Clearpoint and Skyline Drive communities that paid the highest price for lack of action as the Thomas Fire burned across the Ventura Fuel Bed.

Our post Thomas Fire analysis reveals the presence of thick unmanaged brush on the hillsides of Harmon Canyon, north and east of the burned Ventura communities. However, in 1950, when building in the Ondulando subdivision began, the adjacent Harmon Canyon was primarily annual grass.

Recent aerial photos before and after the fire show the Clearpoint subdivision with Harmon Canyon to the east, confirming the dense brush that the fire swept through destroying houses in its path (photos courtesy of the Rancho Ventura Conservation Trust). This dense brush on the hillside is a product of the prohibition of prescribed burns from 1960 to 1988, due primarily to air quality requirements. And recent policies continue to severely limit controlled burns.

An illustration of the lack of wildfire management today as compared to most of our past history is shown in photos of Barlow Canyon (photos courtesy of the Rancho Ventura Conservation Trust). The 1955 photo shows grasslands with small stands of brush that were managed by controlled burns and mechanized brush removal within a cattle grazing operation. In contrast, the 2009 photo shows the hillside covered with thick brush. Moving forward, proactive brush control policies will be critical to public safety in Ventura County in the Wildfire Urban Interfaces. With proper land management, 80% of all home losses from wildfires are preventable. 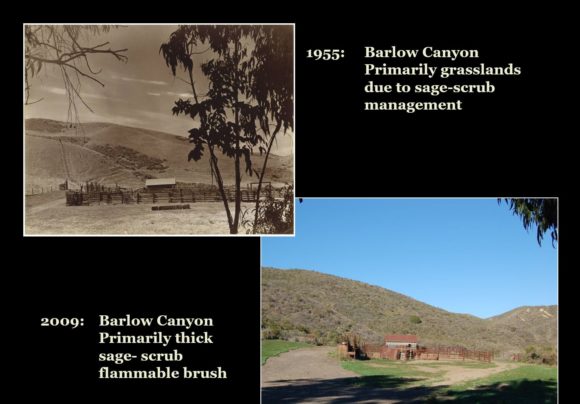 The Ojai Valley Fire Safe Council prepared the 2010 Community Wildfire Protection Plan with participation of Cal Fire and the County Board of Supervisors. The plan described why wildfire hazards and risks have increased in Ventura County: “Fire suppression policies of recent decades have left millions of acres overgrown and crowded with dense and highly flammable brush”. While the Ventura County Fire Protection District has a long-standing countywide weed-abatement program, they approximated that 535,000 people, 185,000 housing units and 13,700 businesses are at risk for wildfires within the at-risk communities of Ventura County.

This is a critical warning to the interface areas adjacent to the populated communities of Simi Valley, Moorpark, Thousand Oaks, and the rural communities of Fillmore and Piru. Both plans recommended wildfire prevention projects that need to be elevated with the highest priority for funding by our Ventura County government to protect our residents.

If you live in a community within the above-recognized fuel beds and have concerns about your fire risk, we encourage you to contact your County Supervisor and ask questions about the status of the wildfire prevention projects near you.

Your community is at high risk if it is in close proximity to rugged terrain with overgrown chaparral. In fact, as we started writing this article on February 19, six spot fires broke out east of Simi Valley, north of the 118 Freeway between Kuehner Drive and Rocky Peak Road. Fortunately, the winds were low and Ventura County Fire Department had it under control quickly. As we know, in Ventura County, Santa Anna winds can exceed 100 miles an hour, leaving very little time for nearby communities to evacuate.

The lack of vegetation management pre-Thomas Fire begs for expanded awareness and for the public to exert pressure on elected officials to make proactive wildfire protection a fiscal priority. While we appreciate the value of open space in our County, it is important to recognize the heightened risk of wildfire that continues to threaten our quality of life. With environmental organizations predicting a future of climate change causing extended drought conditions, it is irresponsible for our elected officials to place lives and property in danger by allowing pristine wilderness to remain unmanaged in close proximity to our developed communities.