The Puente Power Project to replace the aging Mandalay and Ormond Beach power plants in Oxnard promises to deliver significant benefits to the region, according to a presentation given to CoLAB members at the monthly WHEEL Committee meeting by Dawn Gleiter, Senior Director of Development for NRG.

According to NRG, which currently owns and operates the existing Mandalay and Ormond Beach power plants, the proposed replacement gas turbine plant will lead to dramatic improvements, including reduced carbon emissions and water usage, a lower visual impact along the beach and increased revenues for local government.

The Puente Power Project is currently being reviewed by the California Energy Commission (CEC) to replace Mandalay Generation Station’s Units 1 and 2 and Ormond Beach Units 1 and 2.  The four units, natural gas powered steam turbines capable of producing almost 2,000 MW, need to be retired to comply with a 2010 State Water Resources Control Board policy.  That policy created significant restrictions on once-through cooling (OTC) power plants, which pull seawater out of the ocean to cool the turbines.

The Puente project would replace the older units with a state-of-the art, air cooled, natural gas power plant capable of generating 262 MW of power. The new plant would meet a number of needs for the energy situation in the region in addition to complying with the new OTC requirements.

Most importantly, the Puente project will address a critical weakness in the reliability of the local energy grid.  Currently, the Ventura County region is vulnerable to potential service disruption caused by damage to either the high power transmission lines between Moorpark and Pardee or the lines traveling to Goleta.  To address this potential for crippling blackouts in an emergency situation, the CEC required Edison to procure up to 290 MW of natural gas generation in the Moorpark/Ventura area.

The Puente project was designed to meet this need.  Unlike the existing Mandalay and Ormond Beach units, which take hours to bring to full operation from a cold start, the Puente plant can reach over 95% capacity in 10 minutes.  This capability also allows the Puente plant to better support green energy supplies, since renewables like wind and solar are dependent on windy or sunny conditions to generate power.  The Puente plant can provide a backup supply of power to meet demand when renewable sources aren’t supplying enough energy.

In addition to supporting local energy reliability, the Puente project promises to lessen the impact to the community.  The proposed plant significantly reduces the footprint of the existing Mandalay Generating Station, which currently sits on 1.8 acres along the beach.  The Puente project will demolish the existing Mandalay units and the replacement plant will reduce that footprint to less than half an acre. It will also lower the height of the overall facility by 12 feet, and remove the outfall which will improve the visual impact of the site and beach access.

The new Puente plant will also have a significantly improved environmental impact.  Not only will it allow for a greater integration of green energy into the power supply, but it emits significantly less pollutants than the current Mandalay units.  At its max, the Puente plant will emit almost two thirds less pollutants than the Mandalay units, greatly contributing to the regional air quality.

Finally, the Puente Power Project promises to bring in millions of dollars in additional money for the local economy and municipal governments.  The project is expected to bring in almost $3 million in extra property tax and over $5 million in sales tax revenue, with the bulk of that money going to schools and colleges.  Construction of the new plant and demolition of the old units is expected to bring in $16.1 million in local spending by construction workers as well as $68.4 million in local purchases of project materials.  For local union members, the project presents additional opportunities for work, as the construction of the new plant is covered under a Project Labor Agreement, requiring the use of union labor. 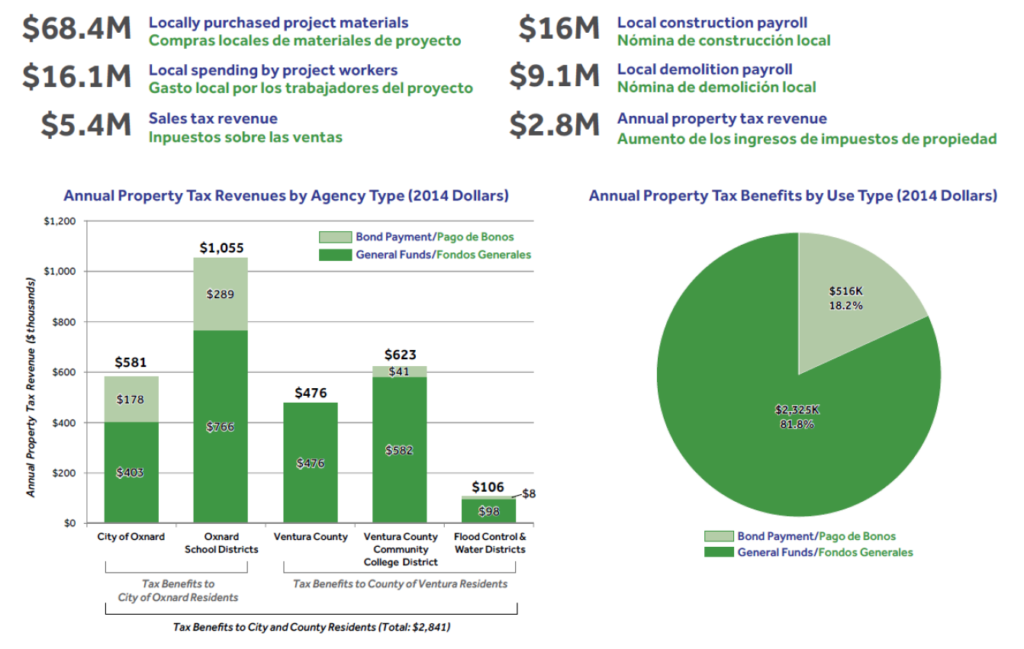 There has been vocal opposition to the proposed plant replacement from within the city of Oxnard, with residents complaining that the new plant should be located away from the beach to improve the viewshed.  The City Council has also passed local ordinances that would restrict the ability of NRG to build the new plant.  However, since the state has jurisdiction over the construction of power plants, it is not clear whether the city would be able to block the project.

While opposition to the project exists, the Puente Power Project promises to bring much-needed jobs and money to our local economy, improve energy reliability, lower emissions and reduce the industrial footprint along the coast.  CoLAB will continue to keep our members updated on the status of this important project as it moves through the state approval process.