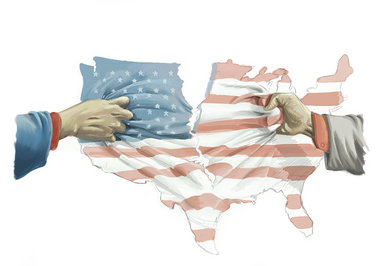 Last May we wrote a prophetic newsletter story entitled “Will 2016 be the Year that Voters Defy Career Politicians?” We discussed the level of political dysfunction in our country, pointing out that 2016 is magnifying an intensive disrespect for career politicians by voters.

As predicted, our mailboxes were stuffed with negative campaign mailers filled with many lies about state and local candidates and ballot measures. The long and complicated ballot described potential new state and local laws that are sure to have dubious long term effects that there will be no accountability for.

On the national level, this defiance was clearly demonstrated in the most important contest where voters rejected the political establishment, choosing an outsider for president. And based on the patterns of voting across the country, this election displayed the increasing disconnect between coastal cities and the more rural interior counties across the country.

As expected, California’s rural voters had little say in political contests as the city populations have drowned out their vote. While workers in the rural areas struggle to meet city dwellers’ demand for food, building materials and energy, they are demonized for their efforts based on vague environmental values, many with a questionable scientific basis.

In an Op-Ed in the L.A. Times, Victor Davis Hanson characterized the growing division in America between rural and city residents in “How the widening urban-rural divide threatens America.” (1 Nov. 2015). Hanson described concerns of rural residents: “Does the country have enough food, fuel and minerals? Can America defend itself, protect its friends and punish its enemies? These concerns differ markedly from those of urbanites who worry about whether the government will provide services to take care of vulnerable populations or whether those of different races and religions can get along in such a crowded environment…”

Hanson relates the division from his own personal experience: “At my house, (in the rural Central Valley) I worry about whether the well will go dry. I lock the driveway gate at night, and if someone knocks after 10 p.m., I go to the door armed. Each night, I check the security lights in the barnyard and watch to ensure that coyotes aren’t creeping too close from the vineyard. I wage a constant battle against the squirrels, woodpeckers and gophers that undermine the foundation, poke holes in the sheds and destroy irrigation ditches.”

In contrast: “Urbanites may work long hours at the office among thousands of people, but they often remain in a cocooned existence shielded from the physical world… The elite that runs the country in politics, finance, journalism and academia is urban to the core: degrees from brand-name universities, internships at well-connected agencies… The power resume does not include mechanical apprenticeships, work on ships or oil rigs, knowledge of firearms or farm, logging or mining labor — jobs now regulated and overseen by those with little experience of them.”

With respect to environmental issues and the California drought, Hanson extolled the virtues of the California State Water project that was built to provide water to coastal cities and transform the southwestern Central Valley into productive farmland. Fast forward to today where “Millions of acre-feet of precious stored water were released out of rivers as urban environmentalists hoped to increase the population of 3-inch delta smelt and to restore salmon to the upper San Joaquin River. Despite millions of acre-feet of released water, both fish projects have so far failed.”

The failure of water projects to protect endangered species in California have not inspired scientists to question their theories or consider the long-term impact to residents or the rural farmers who grow their food. The reason is simple, there is no accountability for results. It is all too easy to blame the human existence for every environmental problem, invoking new reasons to double down on failed policies.

The good news is a potential shake up at the EPA by a new presidential administration. In an Op-Ed in the Santa Barbara News Press. “Trump could be just what California farmers need.” (27 Nov. 2016), Mike Stoker writes: “The two critical issues facing California farmers are water and labor. With the election of President-elect Donald Trump, California farmers could finally realize relief on both fronts.”

For water, Stoker asserts: “I’ve said for over 20 years that California does not have a water shortage problem; we have a water storage problem. We exist on a water delivery system designed to serve 17 million people that is now serving almost 40 million people… So what can a President Trump mean in regards to this situation? Specifically, U.S. Rep. David Valadao of Hanford, who represents California’s 21st District, has authored two bills in the last three years that would provide for relief from the ESA in times of drought. Those bills passed in the House but never passed the Senate. President Obama stated he would veto both bills if they made it to his desk. With the new administration, Mr. Valadao’s bill will make it out of the House and chances are very good for passage in the Senate. If that bill gets to President Trump’s desk, there is no question he would sign it into law.”

With respect to labor, Stoker says: “With Mr. Trump as president, I believe we have a great opportunity to pass immigration reform that would allow for workers to get work permits to work for two to five years in the U.S. with the ability to renew once the work period expires… Essentially, we will have a modern-day Bracero Program.”

While political dysfunction will certainly continue as predicted, we hope for the sake of California farmers, on these two issues, that Stoker is right. While many urban Californians did not respond to the concerns of those in their state who provide their food, building materials and energy, these hard working Americans will be harder to ignore in the next four years.