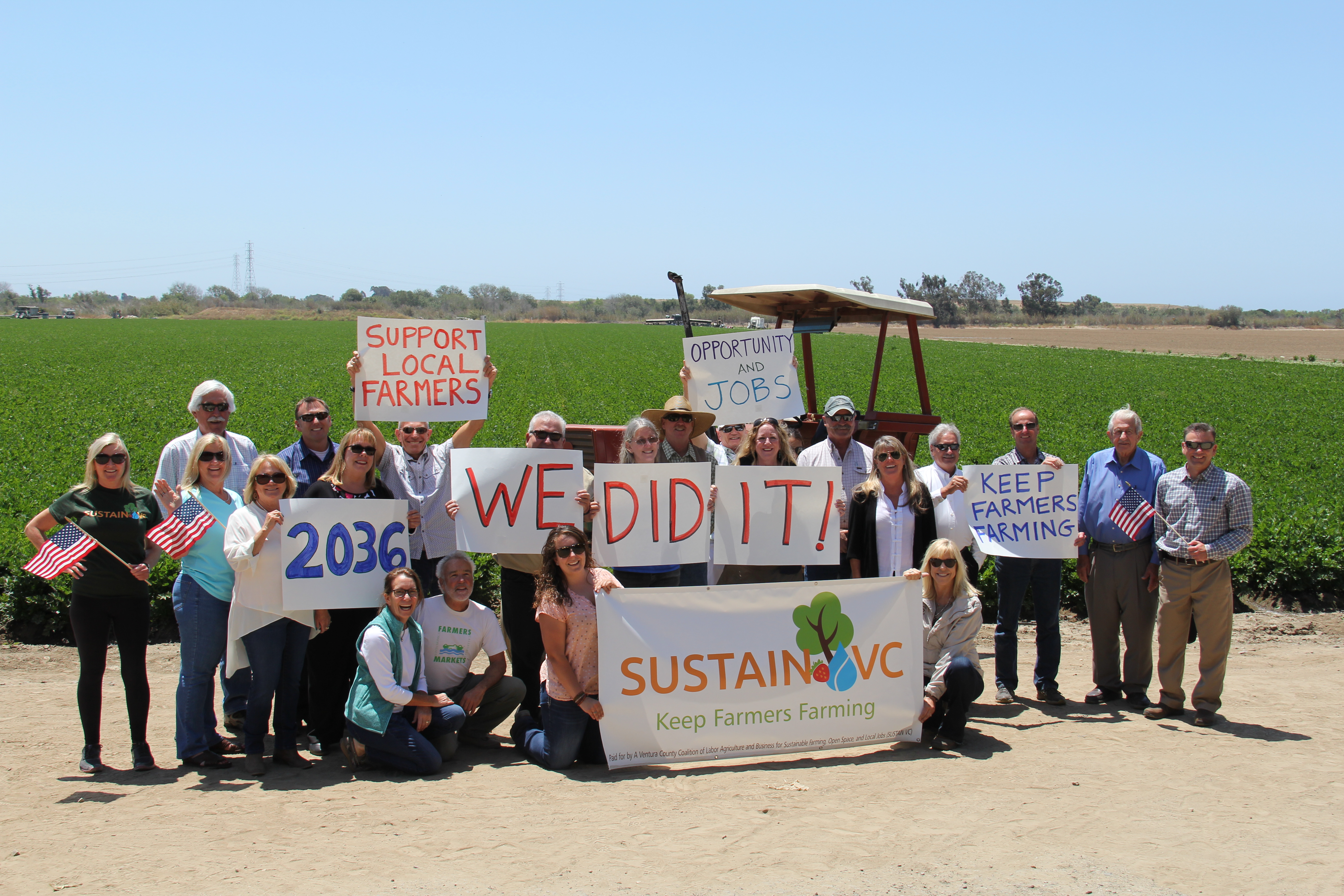 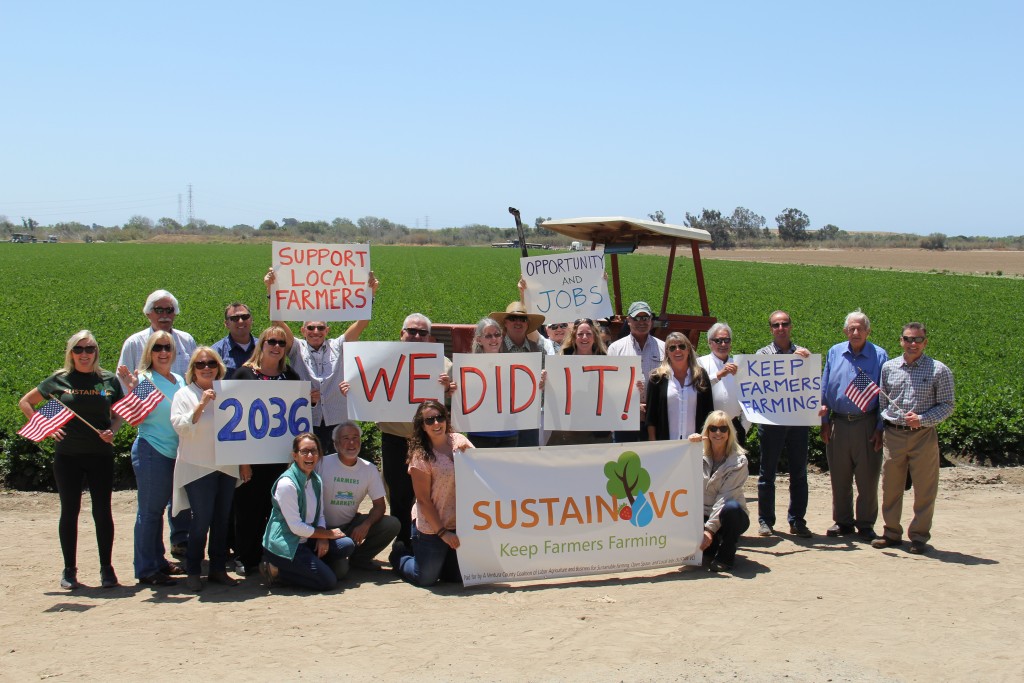 After submitting 30,300 signatures to the Ventura County Elections Division on May 27th, we were notified on June 9th that our petition qualified, marking an epic milestone in the SUSTAIN VC campaign.

We thank our campaign team, volunteers and supporters across the County for their dedication and hard work in qualifying for the November ballot. We also thank Mark Lunn and the Elections Division for their professional and efficient process.

This year, Ventura County voters will have an important choice to make on goals and policies that have significant impacts for local agriculture. SUSTAIN VC represents an opportunity for local farmers and those who truly support them to make their case directly to the voters instead of having their destiny controlled by the SOAR Organization.

SOAR is an exclusive group dominated by politicians whose true goal is to maintain control of countywide policies and land use. Everything about the SOAR campaign, from its ballot language to selecting 2050 as their expiration date, is about preservation of the political legacy of a powerful few. They have no real interest in helping farming and will not have to live with the 34 years of the measure’s consequences.

Their stock in trade is clear: throwing about buzzwords on a glossy brochure to elicit an emotional response. Words and pictures however, are not what it takes to “save agriculture.” By their actions the SOAR proponents – who have consistently failed to heed appeals for sensible agricultural policy reforms – show what they really think about Ventura County’s farming legacy.

We know what we are up against. Opponents of SUSTAIN VC scrambled quickly to demonize the effort, disparaging our signature gatherers and making false statements about our supporters. The themes of the campaign are becoming clear in the local press and social media chatter. What they oppose is anyone else having the temerity to trespass on what they consider to be their exclusive domain.

A Facebook post by the SOAR campaign featured a Mercury News article published May 17th titled America’s vanishing West: California losing most land to development. The article actually names agriculture as a threat: “The natural landscape of the American West is gradually disappearing under a relentless march of new subdivisions, roads, oil and gas production, agricultural operations and other human development…” This reinforces the claim that the local agricultural community has made all along; SOAR is about preserving wild spaces, not farming.

As an alternative to the Countywide SOAR ballot measure, SUSTAIN VC keeps the same policies as SOAR to preserve our open spaces, but recognizes that if you really want to maintain farm land in Ventura County, farming must be a successful, economically viable activity.

In SOAR’s rush to renew their multiple SOAR 2050 city initiatives years before they expire, recent problems have been identified by election officials and city staffers. Issues have ranged from technical glitches to problematic language and map errors.

In Ventura, the initiative’s reference to the wrong planning document has left a large portion of coastal land area without a voter requirement. This and other substantive issues and inaccuracies were identified by city staff and relayed to council members who voted on May 16th to take 30 days to review the language.

In Fillmore, the SUSTAIN VC attorney sent the City Clerk a letter identifying a map error on the SOAR petition. The Fillmore City Council voted to place the flawed initiative, set to expire in 2050, on the ballot.

In Oxnard, SOAR decided to forgo signature gathering and instead ask the city council to place their initiative directly on the ballot. This seemingly backfired when the City Council accepted staff’s recommendation to reject the language and boundary changes requested by SOAR. Unable to agree on the expiration timeframe, Oxnard will place two initiatives on the ballot, one expiring in 2030 and one in 2050, so Oxnard residents will have a choice in November.

In Thousand Oaks, the City Clerk deemed the SOAR petition insufficient as the text of the initiative didn’t appear on the first page as the law requires. The Thousand Oaks City Council directed staff to draft an ordinance, identical to the proposed initiative, with minor clean-up of the language, for their consideration to place on the ballot as a city-sponsored initiative.

In Camarillo, an incorrect date on petitions required signature gatherers to start from scratch and repeat the process. After successfully repeating that process, the Camarillo City Council voted to postpone a decision to place the initiative on the ballot due to a lawsuit that claimed it had “fatal flaws” and “numerous serious defects”. The City Attorney disagreed with the claims and on June 5th, the Camarillo City Council voted to place the initiative as is on the ballot.

In Simi Valley, SOAR did not collect enough valid signatures to qualify for the ballot.

In spite of all of these problems, SOAR has maintained a “just trust us” attitude when it comes to their renewal and the policies it contains, repeatedly calling for voter choice.

At the Oxnard City Council meeting on April 12th, County Supervisor and SOAR board member Linda Parks testified, “I really believe strongly in the voters. I believe the voters should have a say and I believe we shouldn’t limit that say. I believe in a vote of the people.” This doesn’t square with a SOAR post on social media directing Ventura County voters not to sign SUSTAIN VC petitions, an action that would clearly restrict voter choice.

For the first time in almost two decades, Ventura County voters will be offered the chance to consider what local farmers need to overcome unprecedented challenges and be successful in the future. For the next several months, the SUSTAIN VC campaign will take their message to the people and respond to the false attacks from the SOAR politicians and their followers.

With your help, SUSTAIN VC can secure a much needed victory for local farmers and serve the long term interests and viability for Ventura County agriculture. This will be an expensive campaign and we are asking for volunteers and donations. You can donate online HERE. For more information, please visit the website at www.sustainvc.org or call us at (805) 620-7182.