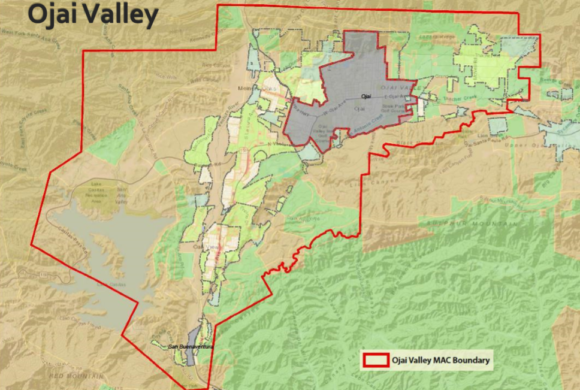 In a process beginning at the Ojai Valley Municipal Advisory Committee (MAC), the County Planning Division proposed new regulations to restrict outdoor nighttime lighting within the MAC boundary in order to facilitate viewing of the night sky. The resulting ordinance, passed by the Board of Supervisors on 9-25-18 with a 3-2 vote, creates the “Dark Sky Overlay Zone”, adding new zoning designations to every unincorporated parcel within the Ojai MAC boundary.

While CoLAB recognizes that Ojai is a special place and that stargazing is a worthy pastime, we were concerned with proposed lighting restrictions on remote properties limiting the ability of local residents to maintain safety and security of their families and property. We were also very concerned with the lack of notification to the public and especially to commercial and industrial properties within the MAC area who would shoulder much of the economic burden of replacement lighting.

In reviewing the ordinance carefully, we found a number of issues with the language and worked with county planners to improve the resulting regulations. Further, in a meeting with the County CEO’s office including Resource Management Agency Director, Chris Stephens, we secured a commitment to send an information mailer to parcels on the Ojai commercial corridor. The mailer would notify them of pending new regulations being considered at the scheduled Board of Supervisors public hearing.

With respect to the process, we were very disappointed with the Planning Commission hearing in that the Commissioners were not given sufficient time to consider the volume of technical issues being proposed and there were no lighting or security experts consulted in preparing the draft ordinance. Therefore, at the Planning Commission hearing there was no testimony by either County law enforcement or any lighting consultants to challenge or confirm consequences of the proposed lighting standards. This created consternation and confusion for the Commissioners during their discussions. And, even though the Planning Commission recommended that technical lighting experts be contacted to review the language, Planning did not heed the recommendation and did not have a lighting consultant to testify or answer questions at the Board of Supervisors.

The resulting ordinance generally requires outdoor light fixtures to be fully shielded and directed downward or switched off after 10:00 pm. Maximum brightness, color temperatures and light trespass limits are also specified. The deadline for compliance is November 1, 2019.

To lessen the burden on local residents, the County created a list of “exempt” lighting and a category of “essential luminaires” that would be allowed to remain on after 10:00 pm. In addition, CoLAB worked with the County at the Agricultural Policy Advisory Committee to include language that exempted agriculture from the motion sensor and brightness requirements for usual and customary nighttime agricultural operations that are temporary or intermittent.

A major target of the regulations are commercial and industrial businesses in the Ojai MAC area who are being required to replace all non-compliant lighting by November 1, 2021. CoLAB objected that this would force existing businesses to shoulder the potentially unfeasible economic burden of replacement lighting for a public benefit without compensation. While a process for an extension of the deadline is described in the ordinance, all non-compliant commercial and industrial light fixtures are required to be turned off at 10:00 pm while a request is pending.

Another onerous limitation requires property owners to install motion sensors on security lights with bulbs over a 60-watt equivalent threshold. This policy was adopted by the Board of Supervisors in spite of the testimony of Ojai Sheriff Captain James Fryhoff at the hearing that motion sensor lighting is ineffective in more rural areas due to wind and wildlife setting the motion sensors on and off. We believe this will be a significant hurdle to providing safety and security for families and their property in the remote areas of the county where there are no street lights.

Greenhouses were also a target in the Ojai MAC area, requiring blackout screening for walls and roofs, preventing interior night lighting from being visible outside the structure.

The final language approved by the Board is complicated and may be difficult for the average person to understand. We are listing a few of the additional standards below. For a detailed review please consult the final Dark Sky Ordinance approved on September 25, 2018.

While we believe that the final approved ordinance is a significant improvement, we continue to be concerned about how the County will enforce this ordinance and the balance between security, affordability, personal enjoyment of outdoor entertainment spaces after 10:00 pm and the opportunities to view the night sky. VC CoLAB will be ever vigilant in making sure that any further areas adopting such dark sky restrictions be required to notify property owners and take into consideration safety and security concerns of the local businesses and residents.