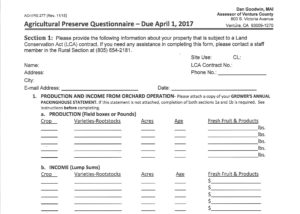 There is no doubt that the Ventura County Assessor’s office is losing patience with agricultural landowners as the delinquency rate of returning annual Agricultural Preserve Questionnaires remains over 20%. These questionnaires are a condition of the Williamson Act Land Conservation program that provides $2.2 million in tax relief to the 1,100 parcels in contracts countywide.

While our notification efforts this year increased compliance through collaboration with County Planning and the Assessor’s Office for fiscal year 2017, the County is considering penalties for non-filers for next year. In discussions with the Assessor’s Office, they have been considering a 10% penalty for the first year of delinquency and placing the contracts in non-renewal for a second consecutive year of non-filing.

LCA contract questionnaires are mailed out in December for each fiscal year and are due annually on April 1st of the following year. They are due EVERY YEAR regardless of whether there have been any changes in the agricultural operation. The April 1st deadline is important as the Assessor must begin manually estimating the tax savings assessment for each non-filer parcel at an additional cost to the County for staff to review aerial maps and make calculations.

After contacting the Assessor’s office about the problem, VC CoLAB published an article in February of 2017 imploring agricultural property owners to file their 2016 annual questionnaires by April 1st of 2017. We had a “Circle the Wagons” event in March of 2017 and notified our non-profit partners to get the word out to their members. Unfortunately, at that time we could not secure information to contact contract holders directly who were delinquent and the number of non-returned contracts actually went up from 302 to 336.

For the 2017 fiscal year, the Assessor informed us that 451 questionnaires had not been received by the April 1, 2018 deadline. The Assessor sent out second notices to the non-filers with a final deadline of May 1st. But by May 1st, there were still 339 contract questionnaires that had not been returned. We again notified our members of the risk to the entire LCA program from the non-returned contracts.

But this time VC CoLAB secured a list of the delinquent parties and personally emailed questionnaires to 20 entities representing 63 contracts to solicit compliance. Ultimately in early May we learned that our efforts helped push down the number of non- filers to 243 contracts, lowering the non-filing rate to 22%.

In our process, we solicited responses from the non-filers and received some good information on the difficulties of this seemingly simple process of filling out and returning questionnaires:

The Assessor has a change of address form on their website but keep in mind this will change the address where your tax forms are mailed to as well.

To help address the return rate outside of the penalty discussion, one of our recommendations is to change the questionnaire envelope to look more official or some other flagging to distinguish it from the other many questionnaires AG landowners receive.

In addition, we recommend that the cover letter indicate what the tax savings is for each contract holder in the program and what a 10% penalty would be for non-filing. There could also be some language about the process required to re-apply to the LCA program which will be expensive and time consuming.

We are hoping that through a continuing education campaign, VC CoLAB will increase compliance for the 2018 fiscal year. We plan to keep in communication with County Planning and the Assessor’s office to help facilitate filing and would like to start sending notifications to our members directly after the questionnaires are mailed in December as a reminder to keep a lookout.

Please pass this information on to your colleagues and neighbors who may be in the LCA program. VC CoLAB is thankful for the continued support of this program by the County Board of Supervisors with its contribution to the County’s economic viability and long-term land preservation goals.